Dear readers and editors!
We are considering deleting Eador Wiki unless there are valid objections against that process.
Please use the discussion page on the Community Portal to bring up any concerns. 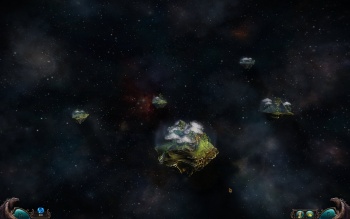 Eador, the setting of the game, is a universe made of countless shards of land drifting in the Great Nothing. Each of the shards is a little world unto itself, with geography and denizens of its own. The power over the shards is bitterly contested by Masters, the immortal beings mortals believe to be gods.

The world of Eador was shattered into pieces, the so-called ‘shards’, in a great magical Cataclysm. Some shards were completely devastated, while some others were less damaged and able to reconstruct. Masters of Eador are able to travel through space and attach newly conquered shards to their homeworld.

Each shard has its own characteristics and population. Below are a few examples:

Gold income is halved but gem income is doubled.
Obviously mages get a big advantage on this shard. You won't be able to lead a large army and losing units in battles is really going to hit your budget.

The player's lands are separated by mountain ranges. Narrow passes connecting the enemies are protected by strong guards.
This prevents any attempts at rushing in with a Warrior hero to conquer an enemy's capital.

All tales and legends on this shard tell of unspeakable horrors and torments haunting the mortals throughout their lives. None can say whether these tales are true, but the life of locals is ever tainted with fear.
Morale drop due to wounds and deaths of allies is increased, the units will panic more often in battle. Population mood is lowered, but unrest growth rate is also decreased.

Higher population. Nearly all provinces are explored to 80-100% so there’s no need for a player to continue exploring. There are many free settlements and princes’ lands, almost no barbarians. Beginning with circle 2, guards of neutral provinces are stronger than usual. Many provinces already feature buildings (mills, mines etc).

The people dwelling on this shard are fanatical worshippers of the Lord of Light. They consider all other Masters to be demons trying to lead them astray from the one true path.
Population mood in all human provinces is lowered by 2. Many abandoned temples and lands ruled by the inquisition. If the campaign player has selected the Lord of Light as an official faith on his shard (campaign event 197, “Your world is sufficiently large, and the human clergymen have long been talking about the One Religion.”), mood penalty is lessened by 1.